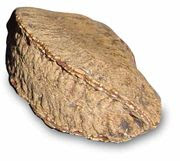 What is the nut shown on the right? (the answer is in the references section).

Only 50% of people with a nut allergy can visually identify all the nuts they are allergic to, according to a study presented during the 2010 ACAAI meeting and published in December 2011.

More than half of adults were able to identify a range of common nuts, with peanuts leading the way at 95% for unshelled nuts.

Less than 50% could pick out such nuts as hazelnuts or pecans.

Of parents with an allergic child, 73% were able to name all those that affected the child.
Allergic children could only name 34% of the nuts.

Over a five-year period, 55% of people with peanut allergy had reactions after accidentally eating the wrong nut.

The only safe way to avoid one kind of nut is to avoid them all. "I tend to tell my patients with a true peanut allergy to just stay away from all nuts. You never know when there's going to be some peanut, especially in mixed nuts."

Treatment for nut allergy should include education on how to recognize different nuts.

The ability of adults and children to visually identify peanuts and tree nuts is unreliable (study). Annals of Allergy, Asthma and Immunology, 2011.
ACAAI: Nut Puzzle Baffles Most People. MedPage Today.
Is It A Peanut Or A Tree Nut? Half Of Those With Allergies Aren't Sure  http://goo.gl/9R9UA
Image source: Unshelled Brazil Nut, Wikipedia, GNU Free Documentation License.

@Allergy: Remember: People w nut allergy not able to visually identify the nuts they're allergic to t.co/N673EQrk - Avoid all nuts if allergic

@Allergy: Cross-contamination is a problem in nut allergy. Identification will not help this.

@gastromom Meenakshi Budhraja:  Bummer!!! Nuts are an integral part of a healthy Plant Based Diet. Cross contamination during processing?
Posted by Author on 2/15/2011