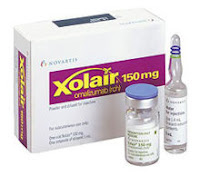 The monoclonal antibody omalizumab (anti-IgE), given at doses higher than those used in asthma, rapidly reduced urticaria activity scores.

The study followed up an unexpected observation that, in asthma patients with urticaria, the skin condition often responded quickly when they were treated with omalizumab (trade name Xolair). This was an "unanticipated benefit" because "a lot of urticaria is not necessarily allergic-oriented."

The primary endpoint was the change from baseline in the 7-day urticaria activity score (UAS7), which is a diary-based combined score of severity of itch and number of hives. The maximum score is 42.

The effect was rapid, patients in the 300-mg group had an average 13-point drop in the UAS7 one week after the single dose.

Omalizumab is expensive, but for urticaria the benefit appears with only a single dose.