Basophils contribute to anaphylaxis and allergies. The researchers examined the utility of assessing basophil-associated surface antigens (CD11b/CD63/CD123/CD203c/CD294) in characterizing and monitoring subjects with nut allergy. 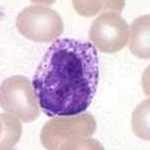 CD203c levels increased in nut allergy
Basophil CD203c levels were increased at baseline in subjects with nut allergy compared to healthy controls.
Increased expression of CD203c occurred when basophils were stimulated with the allergen.

CD203c expression was decreased after 4 and 8 weeks of omalizumab (anti-IgE, Xolair) treatment but returned to baseline after treatment was stopped.