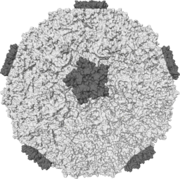 Larry Borish on "Rhinovirus-Induced Asthma Exacerbations: How it happens and implications for treatment."

September and May Epidemics of Asthma Exacerbations in Kids in North America - 80% are due to rhinovirus: https://twitter.com/MatthewBowdish/status/956232214806609921

Rhinovirus is truly the perfect pathogen because it doesn't ever kill its host and it doesn't make you so sick that you have to stay home, allowing for easier spread.

But it's not just the rhinovirus leading to exacerbations, it's the rhinovirus infection occurring during the allergy seasons (Fall: ragweed/Alternaria; Spring: grass pollen)).

Most asthma exacerbation in children and adolescents occur in association with rhinovirus infection. This trend reflects concomitant presence of allergic sensitization to aeroallergens expressed at the time of infection.

Two schools of thoughts on why rhinovirus associated with asthma exacerbations: https://twitter.com/MatthewBowdish/status/956235171988213760

Dr Borish points out that when he does studies using nasal epithelial cells, he grows them up in culture and then studies are done on the great(x5)-grandchildren cells. How do those cells remember they are asthmatic epithelial cells and make IL25, IL33 and TSLP?