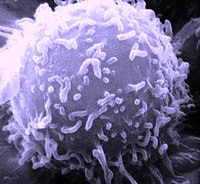 This study from Turkey investigated the long-term outcome for children with asthma to determine the risk factors in predicting persistence of disease. It included 62 children with asthma who were evaluated retrospectively at the end of a 10 year follow-up (mean age at final assessment was 15.9 years).

Atopy, rhinitis and bronchial hyperreactivity are important risk factors for the persistence of asthma in children. Allergen-induced CD4+CD25+ T cells were higher in the atopic children who outgrew their disease, implicating an immunological mechanism of asthma remission in children.

- Natural Tregs (nTreg). nTregs develop in the thymus and constitutively express Foxp3 and CD25. They depend upon IL-2 for their survival.

- Induced Tregs (iTreg). iTregs are induced from naïve CD4 in the periphery. They express Foxp3 only after development by TGF-b.

Regulatory T cells - 6 groups have been described (click to enlarge the image).