The first bronchodilator available as a transdermal patch: tulobuterol

Tulobuterol patch ("Hokunalin Tape") contains a beta (2)-adrenergic agonist and is the first bronchodilator to be available as a transdermal patch.

Tulobuterol patch was first approved in Japan in 1998 and has been apparently used widely in the treatment of bronchial asthma and chronic obstructive pulmonary disease (COPD) (not in the U.S.).

The patch equires only once-daily application, and consequently treatment adherence is good. 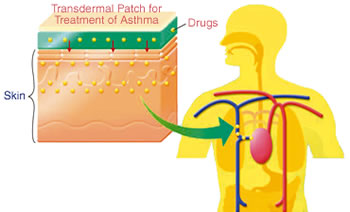 The Hokunalin® Tape was jointly developed in 1988 by Abbott Japan Co., Ltd and Nitto Denko as the world's first transdermal patch for treatment of asthma. Source: Nitto.com