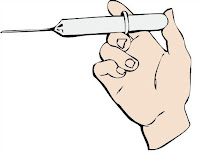 Here are some of the immunotherapy-related tweets from 2011 annual AAAAI meeting. They were labeled #AAAAI and based on real time updates by Sakina Bajowala, M.D @allergistmommy and Robert Silge, MD @DoctorMac and @utahallergy. The text was edited, modified, and added to by me.

Allergen immunotherapy was introduced by Leonard Noon 100 years ago and is the only disease-modifying treatment for allergic individuals (Allergy, 2012).

Omalizumab has protective effect against systemic reactions during both rush and maintenance immunotherapy. There is no FDA-indication for it, but asthmatics on immunotherapy may benefit from omaluzumab.

New practice parameters state that in life-threatening insect allergy, the use of beta blocker is not a contraindication. Venom mmunotherapy can be given during beta blocker therapy, based on risk-benefit analysis.