Newer, less-sedating antihistamines are effective in the treatment of acquired cold urticaria

Acquired cold urticaria (ACU) is a form of physical urticaria that has been traditionally treated with first-generation antihistamines.

Data were extracted via a MEDLINE search of the literature between 1950-2009 - comparing the treatment of patients with ACU with second- and third-generation antihistamine medications vs. placebo (98 patients from 4 studies)

Two trials demonstrated a reduction in wheal area after treatment with a second- or third-generation antihistamine.

All 4 studies assessed the tolerability of a second- or third-generation antihistamine vs placebo and found an increased rate of adverse events (OR, 3.04), most of them rates as mild.

The newer, less-sedating antihistamines seem to be effective in the treatment of ACU in terms of their ability to significantly reduce the presence of wheals and pruritus after cold exposure. These medications are usually well tolerated, with only mild adverse effects. Diagnosis of Chronic Urticaria (click to enlarge the image). 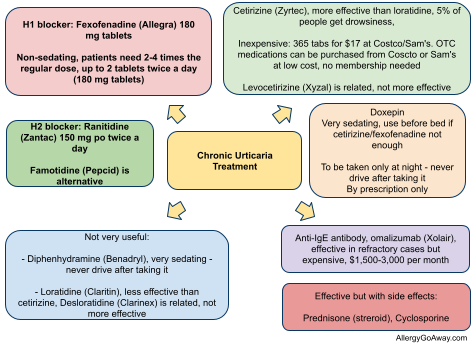