Cyclosporine beneficial in 82% of patients with severe chronic urticaria

The treatment of severe chronic urticaria (CU) remains a difficult goal to achieve. Many patients do not respond to anti-histamine therapy, even when off-label doses are given. Thus, cyclosporine-A (CsA) has been considered as therapeutic option for severe patients.
Among 2000 patients with CU who were referred to an outpatient clinic, 120 patients who suffered from a very severe CU began treatment with CsA 3 mg/kg.
In 20 patients, CsA was discontinued within 2-15 days after initiation because of side-effects.
Among 62 of the remaining 100 patients (62%), CsA was administered for a period of 3 months with a highly beneficial outcome.
In another 20 patients (20%), CsA was considered beneficial; however, it was required for a longer period of time, 5-10 years for some of the cases.
For 18 patients (18%), CsA therapy was reported as failed.
A low dose of CsA may be a good option for patients who suffer from especially severe CU.
Cyclosporine blocks T cell cytokine production by inhibiting activation of the NFAT transcription factor (note: different from NFkB).

Together with tacrolimus, cyclosporine is a calcineurin inhibitor (CNI). Initially isolated from a Norwegian soil sample, Ciclosporin A, the main form of the drug, is a cyclic peptide of 11 amino acids produced by the fungus Beauveria nivea. 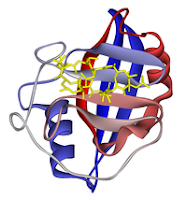 Cyclosporin is thought to bind to the cytosolic protein cyclophilin (an immunophilin) of lymphocytes, especially T-lymphocytes. This complex of cyclosporin and cyclophilin inhibits calcineurin, which under normal circumstances induces the transcription of interleukin-2.