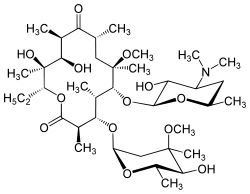 Clarithromycin is one of the frequently prescribed oral macrolidic antibiotics in the pediatric population (the chemical structure is shown on the right). Suspected adverse reactions to clarithromycin have been relatively often described by parents but there is a lack of reliable detection of specific IgE antibodies.

9 of the 64 children had an immediately positive intradermal response to the 10:2 dilution and only 1 child to the 10:3 dilution (0.05 mg/mL). None had positive skin prick test results or delayed skin responses to intradermal tests. 4 of 64 children (6%) with previously described adverse reactions due to clarithromycin intake had a positive OPT reaction.

When the intradermal skin test was correlated to the OPT results, intradermal test sensitivity and specificity were 75% and 90%, respectively.

Intradermal tests seem to be useful in workup in children with suspected clarithromycin hypersensitivity and may help reduce the need for OPTs.

Classification of adverse reactions to drugs.

SOAP III mnemonic for classification of adverse reactions to drugs.