Meat allergy is rare in adults and not readily recognized 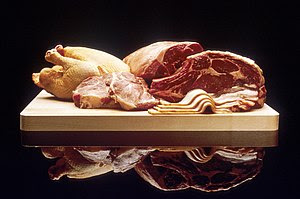 Meat allergy is rare in adults because it is normally outgrown during the first years of life.

Beef among mammals and chicken among birds are most frequently involved. The major allergens are serum albumins and immunoglobulins (from blood).

Meat allergenicity can be reduced by various treatments - heat, homogenization and freeze-drying.

Most patients allergic to red meat are sensitized to gelatin. Alpha-Gal IgE might be the target of reactivity to gelatin (JACI, 2012).

Cross Reactions Among Foods (PDF).
A small number of people who are allergic to cat may also get allergic reactions when eating pork http://goo.gl/zVSaN
Image source: Varieties of meat, Wikipedia, public domain.
Posted by Author on 6/25/2009