Allergy to Wine? Correct Diagnosis May be Wine-Induced Anaphylaxis and Sensitization to Hymenoptera Venom

"A metabolic phenomenon called "alcohol flush reaction" is common among people of East Asian decent, and is commonly called an allergy.:

Alcohol flush reaction is a condition in which the body cannot break down ingested alcohol completely, due to a missense polymorphism that encodes the enzyme, acetaldehyde dehydrogenase, normally responsible for breaking down acetaldehyde, a product of the metabolism of alcohol. Flushing is associated with the erythema (reddening caused by dilation of capillaries) of the face, neck, shoulder, and in some cases, the entire body after consumption of alcohol.

"There are a handful of people reported in the medical literature who were allergic to something in the grape. But a lot more goes into a bottle of wine than grapes. Take sulfites, which are commonly blamed for allergies. Vineyards add sulfites to wine to keep it from spoiling into vinegar too quickly. Despite their notoriety, allergists say the chances of someone responding to sulfites are one in 100. Even when sulfites cause problems, doctors are debating whether it is technically an allergy. Especially among asthmatics, sulfites act as irritants to the nose and lungs in a similar way as cigarette smoke and perfume can. You're not really allergic to the cologne if you start sneezing. Whether sulfite sensitivity is technically an allergy or not, the statistic that just 1 percent of people actually react to sulfites."

An alternative explanation may be "oral allergy syndrome": a cross reaction between pollen in the air and a chemical in food can magnify any existing allergies. Among the culprits are banana, kiwi, melon and grapes." 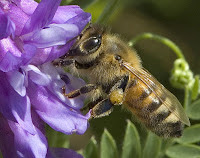 Wine contains chemical and biological contaminants. Symptoms such as facial flushing, asthma and oral allergic swelling and burning (oral allergy syndrome) have been attributed to these contaminants and food additives.

Recent studies have shown a reported high prevalence of hypersensitivity symptoms after intake of alcoholic drinks with red wine as the most common implicated beverage.

Wine contains many contaminants. Some of them come from Hymenoptera insects that fall into the wine when grapes are collected and pressed. We have found patients with allergic symptoms related to wine consumption who are sensitized to Hymenoptera venom without previous stings.

A Spanish study reported patients with allergic symptoms related to wine consumption who are sensitized to Hymenoptera venoms. Challenges were negative with sulfites, other additives and aging wines, but positive with young wines. Sera from all the patients detected Hymenoptera venom antigens.

The author claims that those were the first cases of sensitization to venom antigens by the oral route.