According to NYT, the F.D.A. was still investigating whether 62 deaths during a 14-month period that began in January 2007 were caused by allergic reactions to heparin-like contaminant made in China that was added to the during the manufacturing process.

Currently, heparin is made from the mucous membranes in pig intestines in a process which involves thousands of small family workshops. 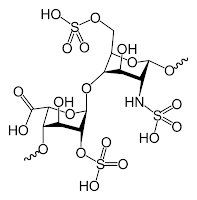 A recent report from NEJM identifies the trigger in the heparin-related anaphylaxis as oversulphated chondroitin sulphate (OSCS). The compound triggered in pigs the same symptoms that have been seen in patients treated with the contaminated heparin. The contaminated heparin activated 2 inflammatory pathways, causing severe allergic reactions and hypotension.

OSCS directly activated the kinin–kallikrein pathway in human plasma, which can lead to the generation of bradykinin, a potent vasoactive mediator. In addition, OSCS induced generation of C3a and C5a, potent anaphylatoxins derived from complement proteins. Activation of these two pathways was unexpectedly linked and dependent on fluid-phase activation of factor XII.

Complement system is a cascade of enzymes which leads to a membrane attack complex (MAC) which causes osmotic lysis of cells. Different fragments of the complement cascade act as inflammatory mediators.

There are 3 pathways for activation of complement:

The 3 pathways (CAM) converge at the point of cleavage of C3. Then C3b becomes an acceptor site for C5, and C5-9 form the membrane attacking complex (MAC). Thus, CAM leads to MAC: 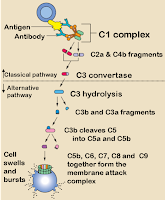 Oversulphated chondroitin sulphate is a complex sugar molecule, similar to heparin, and hence it had not been possible to distinguish the two substances in ordinary screening tests done previously. The researchers wrote that it was “highly unlikely” the chemical was produced naturally.

Oversulfated chondroitin sulfate” is not a product extracted from biological sources -- it is synthesized through a sulfation chemical reaction from the biological molecule. The synthesis process that uses different solvents and reagents such as the toxic pyridine. The resulting product contains 3 or 4 sulfate groups per disaccharide and therefore its structure differs considerably from the original one.

The researchers found that both the contaminated heparin and a pure, synthetically-made version of the contaminant trigger enzymes which cause release of histamines and allergic reactions.

In the current situation, it may be safer to use low-molecular weight heparin (enoxaparin, Lovenox) for DVT prophylaxis and treatment of DVT/PE whenever possible. Lovenox is not approved for use in dialysis patients -- a group most affected by the current wave of fatal allergic reactions to heparin.