According to the TV station WNYT.com:

"A couple is blaming their teenage son's suicide on the allergy drug Singulair. On October 2, 2007, two months after Cody's death, Merck updated the warning for Singulair to include suicidal thoughts and actions. Company spokesman Ronald Rogers tells me the company received some post marketing events and changed the package insert, patient brochures and ads. Drug reps were instructed to share the information with clients, but none of the doctors or pharmacists we checked with was aware of the update."

A PDF with the updated Singulair adverse effects is available from the Merck website.

As of 2/27/2008, a Pubmed search does not show any published reports on suicide risk and Singuair.

Antagonists of the CysLT1 receptor (LTRA) are efficacious as controller therapy in asthma and montelukast is FDA-approved for treatment of seasonal allergic rhinitis.

Mast cells quickly generate different mediators from the metabolism of arachidonic acid: leukotrienes and prostglandins (LTC4, LTB4, PGD2). These substances are produced within minutes of IgE-receptor crosslinking on the surface of mast cells. 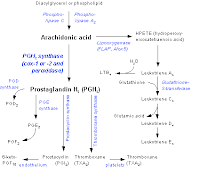