"Google Trends shows an interesting search popularity graph for the queries “turkey” (as in turkey, the food) and “diet.” Searches for the traditional turkey meal peak on Thanksgiving followed by a smaller peak on Christmas. The New Year Day's resolutions bring a surge in queries for "diet" every year, over and over again:

There is an interesting correlation between depression and rain:

Searches for "allergy" peak every spring:

Immunization "shots" searches are most popular in October/November:

Not surprisingly, searches for "bee sting" peak every summer:

"Asthma" searches show a double-peak distribution with the highest frequency in spring and winter, with exacerbations triggered by pollens and upper respiratory tract infections, respectively:

Update from 2014: Two separate research teams published articles on the topic in 2014. We reported this first in 2007 and it was published as an abstract during the 2008 ACAAI meeting:

"The Utility of Google Trends to Structure Patient Related Education Initiatives." (Abstract #P296: Nov. 9 at Noon) " Vesselin Dimov, M.D., Omaha, Neb., et al " As the Internet is gradually becoming the first source for health information for many patients, authors suggest it would be helpful to coincide the education on a particular topic with the time when many patients search for that information. To determine the seasonal trends of allergy-related searches on the Internet search engine Google.com in the U.S., investigators used the search tool Google Trends. For the years 2004-2008, they found searches for "allergy" peaked in the spring and fall; searches for "bee sting" were most frequent during the summer months; and "asthma" searches showed a double-peak distribution with the highest frequency in spring and winter months, which was most likely explained by exacerbations triggered by high pollen count and upper respiratory tract infections, respectively. Knowledge of such variability in search patterns present the opportunity to tailor online and offline educational programs to what patients want to know during a particular time of year. 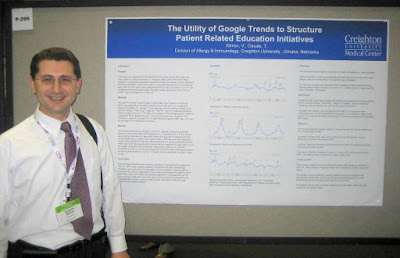 Dr. Dimov presented the poster The Utility of Google Trends to Structure Patient Related Education Initiatives during the 2008 Annual Meeting of the American College of Allergy, Asthma and Immunology (ACAAI) in Seattle, Washington, November 6-11, 2008. The study was selected for a special ACAAI press release among more than 450 abstracts.

Google Trends Reveals People’s Predictability. Google Blogoscoped.
Microsoft Blogger Has as Much PR Power as CEO. What Does That Mean for Your Hospital?
Google Blogoscoped images under a Creative Commons license.