What is the risk of developing asthma after atopic dermatitis? 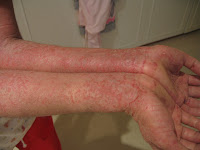 It is a common belief that the majority of infants and young children with atopic dermatitis (called eczema in the referenced study) will develop asthma in later childhood.

This systematic review assessed the risk of developing asthma (by the age of 6 years) in children with atopic dermatitis which had developed during the first 4 years of life.

The researchers found an increased risk of asthma but still only 1 in every 3 children with atopic dermatitis developed asthma. This risk is lower than previously reported.