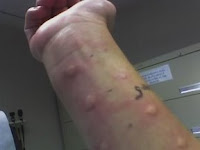 According to The Guardian, Britain is undergoing an epidemic of food allergies in children, and no one knows why. At the same time, there are about 3 pediatric allergists in England.

"In a small outpatients room, the nurse starts to prepare nine-year-old Anushka for a skin-prick test. Along her forearm she draws 12 felt-tip crosses. 'These are where I am going to put the different varieties of nut allergens on to her arm, as well as two chemicals that act as controls, to test it's working properly.' She puts a dab of histamine at the top, to which everyone normally has a reaction in the form of a swelling. She then dabs on little drops of extracts made from peanut, cashew nut, sesame seed, pistachio, hazelnut, brazil nut, macadamia nut, and egg - as 50 per cent of children with nut allergies also react to egg. With amazing dexterity, she then uses a disposable needle to create a tiny nick in the skin on each cross, allowing the extract to penetrate the cells below.

Anushka winces slightly but is otherwise quite interested in the procedure. For 10 minutes we sit and chat, before Roisin looks at her arm again. There is a big swelling in reaction to the histamine, just as there should be. But there is also a substantial swelling in reaction to the peanut extract. 'Look, she's come up with a 8mm weal, so that's a positive reaction,' said Roisin. There is also a 6mm weal around the cashew nut mark."