"Toxic schools": Could mold in school make your child sick?

Despite growing legal claims across the country involving indoor air quality, there is no generally accepted standard for how much mold can be in a room before it becomes unsafe.

Sensitivity levels can vary widely from person to person. If mold is growing on the ceiling or inside the wall of a classroom, some children will not be affected at all. Others, however, might experience flu-like symptoms such as runny noses, coughing and breathing difficulties.

Some types of mold emit toxins that can elicit more severe responses.

For example, Aspergillus and Stachybotrys ("black mold") have been linked to lung and respiratory infections, and have forced the closure of homes and schools across the country. 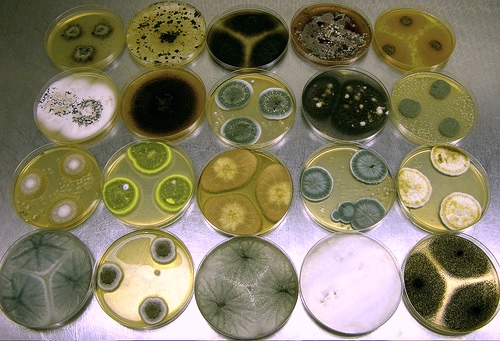 Regarding the mold/asthma link, certain findings have been found consistently: 1. the mold has to be visible, 2. the mold has to be in the room where they live, 3. the patient does not have to be allergic to mold to have symptoms because the some molds release irritant volatile compounds in the air.

What are the most common fungal allergens?

Respiratory exposure to a wide range of fungal spores and fragments is almost constant and 189 fungal species are thought to produce allergens.

Many fungi are capable of causing IgE-mediated hypersensitivity in humans. However, the most predominant fungi implicated in allergy belong to the genera Aspergillus, Alternaria, Cladosporium, and Penicillium.

Are schools making kids sick? 30% have mold, indoor air pollutants that provoke respiratory diseases like asthma - CNN, 2012.
Toxic schools: Could mold be the reason your child is sick? LA Times.
What are the most common fungal allergens?
Poor air quality in classrooms related to asthma and rhinitis. Thorax, 2012.
Exposure to visible mold and/or dampness during first 2 years of life associated with asthma risk - but odds ration (OR) was very close to 1.0. Allergy, 2011.
Posted by Author on 1/19/2011