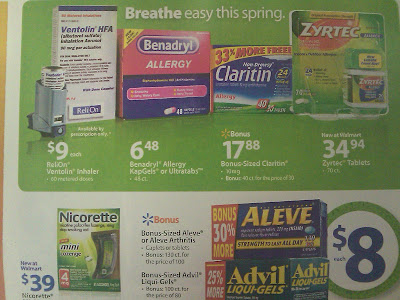 The Walmart's suggestion for over-the-counter (OTC) allergy treatments during this spring pollen season is based on the advertising brochure shown above and includes:

- Ventolin HFA ReliOn (albuterol) is the least expensive SABA on the market but it contains only 60 doses as compared to 200 for the standard and more expensive MDIs. In any case, if you find that you are using your inhaler too often and you run through one of those quickly, you must call your allergist right away.


- Benadryl (diphenhydramine) - I would not recommend using this product especially since we now have at least two nonsedating antihistamines available over the counter (see below).

- Claritin (loratidine) is a solid choice for nonsedating antihistamine, however, a store brand loratidine is less expensive and is typically offered by Walmart and Costco under their Equate and Kirkland line of products, respectively.

- Zyrtec (cetirizine) is another OTC nonsedating antihistamine and some people find it more effective than Claritin (loratidine). However, around 5-10% of patients may report some drowsiness with cetirizine - a side effect not typically observed with loratidine. Similarly to loratidine, Walmart and Costco usually have lower prices for this medication under their store brands (Equate and Kirkland, respectively).
Allegra (fexofenadine) is nonsedating at any dose but is not available over the counter. Loratidine and cetirizine are nonsedating at therapeutic doses but some side effects start to appear as the dose is increased (cetirizine has this side effect in therapeutic doses in 5-10% of people). Cetirizine is is a major metabolite of an old and very sedating antihistamine called hydroxyzine. Xyzal is levocetirizine, the active enantiomer of cetirizine, and has the same side effect profile. Comparison of the sedating effects of levocetirizine and cetirizine: no difference (http://goo.gl/lGu3Q). Both Allegra and Xyzal require prescriptions.