Allergists increase Twitter use 470% in one year - 25 allergists reached 250,000 individuals from #AAAAI meeting

Here are our 2 research posters and abstracts:

Rapid Growth of Twitter Use by Allergists and Immunologists for Professional Purposes: 470% increase (more than 4-fold) in Twitter use by allergists in one year

Twitter is a fast growing social network and microblogging site. Physicians use the medium to educate the public and patients as well as share new studies and garner opinions on new advances in the field from their colleagues.

- Identify the largest directory of allergists and immunologist on Twitter.
- Evaluate the characteristics of use including medical/allergy specific content.
- Analyze interconnections among allergists.
- Describe and evaluate the response garnered from their followers on Twitter.

Comparison of allergists and immunologist use of Twitter during one-year period (May 2011 to May 2012). Descriptive characteristics from the public profile pages of self-identified allergists/immunologists were extracted. Snowball sampling strategy with the search terms “allergists, immunologists, allergy, asthma, wheeze, sneeze”. We also searched Twitter lists compiled by individual users that were identified from the Twitter keyword searches. Accounts representing organizations or physician practices rather than individual allergists were excluded. Protected and non-English language accounts were also excluded. The most recent 20 Twitter updates (tweets) of each individual account were included in the final analysis.

Rapid Growth of Twitter Use by Allergists and Immunologists for Professional Purposes: 470% increase (more than 4-fold) in Twitter use by allergists in one year: 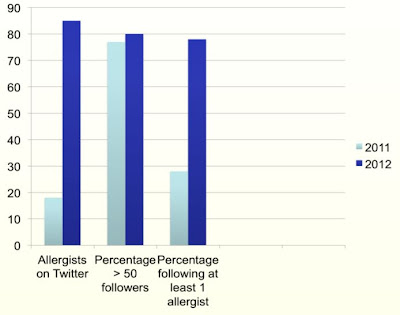 We did not find evidence of unprofessional conduct in the analyzed Twitter updates. 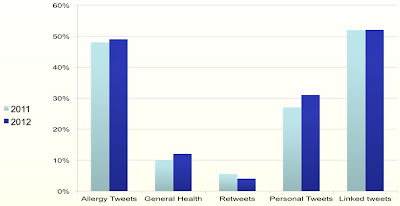 Twitter, a popular social network and free microblogging service, is being rapidly adopted by allergists, with 470% growth in one year.

Future studies should focus on best practices of Twitter use for patient and physician education by individual allergist and specialty organizations.

Tweeting the Meeting: Investigating Twitter Activity at the 2012 AAAAI Conference: 25 allergists expanded the educational reach of the 2012 AAAAI annual meeting to 250,000 individuals

American Academy of Allergy, Asthma and Immunology (AAAAI) has increased its efforts to use social media to disseminate medical information from its annual meetings. Microblog service Twitter can be used to accomplish this goal. This study investigated the use of Twitter during the 2012 AAAAI meeting, labeled with the hashtag #AAAAI.

Twitter search was performed for March 2-6, 2012 (dates of 2012 annual conference) using the search term #AAAAI to gather messages (tweets) posted during the conference. The # symbol (hashtag) is used to mark keywords or topics and is a way to categorize messages, thus allowing messages to be searched and followed by others. Content analysis classified each tweet into 8 categories: fact, reply, status update, retweet, link, opinion, query, and advertisement. The site TweetReach.com searches the extent of exposure data for tweets. This search was used to estimate the number of individuals who read the tweets, a measure of the number of people the information was disseminated to.

Tweeting the Meeting: Investigating Twitter Activity at the 2012 AAAAI Conference: 52.7% of tweets were facts, 7.2% included link to support the information provided: 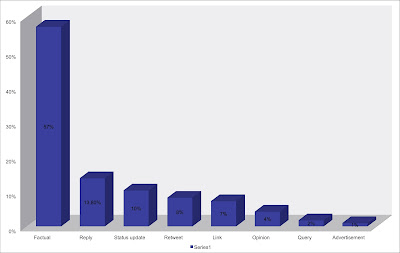 A small subset of 25 allergists expanded the educational reach of the 2012 AAAAI annual meeting to 250,000 individuals. A large number of educational tweets were disseminated to the public. The large majority of tweets were factual and professional. Social media, and Twitter in particular, are an effective method of disseminating medical information to health care professionals and the public. A more organized approach and improved participation among attendees could further increase awareness of the new developments in allergy and immunology in cost-effective and time-efficient manner.

Future research will be directed at the use of Twitter at the 2013 AAAAI conference to determine if Twitter use has increased/decreased. The content analysis could categorize tweets by topic as well as the previously used categories to identify topics which are most frequently discussed and perhaps gauge the interest of the audience at the conference and worldwide. This information could be used to guide future speakers and lectures topics for upcoming conferences as well as identify areas of interest for potential research projects. The role of Twitter as a tool to collaborate research efforts from multiple institutions could be investigated.

Allergists who are planning to use Twitter from 2013 #AAAAI meeting (list open for edit, add your own info)

This is a list of the allergists who are planning to use Twitter to post updates from the 2013 #AAAAI meeting. The list is open for edit, please feel free to add your own info.

The hashtag for the meeting is #AAAAI

The hashtag for the 2013 annual meeting of the American Academy of Allergy, Asthma & Immunology (AAAAI) is #AAAAI

Type #AAAAI in Twitter Search box to find all recent updates from 2013 #AAAAI:

Social media in medicine: How to be a Twitter rock star and help your patients and your practice

I will be presenting a talk and a seminar during the 2013 AAAAI meeting (PDF of the program) on the topic of social media use in healthcare. Feel free to join us, and ask any questions:

There will be the fist ever tweetup (meeting) in real life of the tweeting allergists during the 2013 AAAAI and you can sign up here: http://doodle.com/envkn7umm8643uwx

In my personal experience, blogging fits nicely in what I call the Cycle of Online Information and Physician Education (click here to enlarge the image).

The impact of social media on a major international emergency medicine conference -- Neill et al. -- Emergency Medicine Journal http://bit.ly/Ywhstq
PLOS ONE: Tweeting the Meeting: An In-Depth Analysis of Twitter Activity at Kidney Week 2011 http://buff.ly/XmisPw
Tweeting the Meeting: Investigating Twitter Activity At the 2012 AAAAI Conference http://bit.ly/XyugQP - Disclaimer: I am one of the authors.