Skin testing is the diagnostic cornerstone for allergies and is considered extremely safe, carrying only a small risk of systemic reactions.

A prospective study included 1,500 patients at the University of South Florida and aimed to determine the 12-month incidence of systemic reactions (SRs) to skin prick testing (SPT) and intradermal skin testing (ST). Epinephrine (0.2 mL of a 1:1,000 dilution) was administered intramuscularly in the deltoid as soon as any remote signs or symptoms occurred. 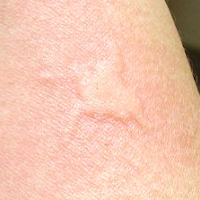 A wheal with multiple pseudopods and a satellite lesion in the upper left. Image source: Modified from Sakurako Kitsa's photostream, Flickr (used with the author's permission).

83% of patients with reactions were female, and 33% had asthma.

Among patients who had allergy skin testing, systemic reactions occurred in:

An older study (1993) showed that the probability of inducing systemic allergic reactions by skin testing was less than 0.02%. This probability has increased 20 times as of year 2009, to 0.4%.

100% of patients quickly responded to epinephrine intramuscularly (IM) in the deltoid. This immediate administration of epinephrine seems to prevent more serious and biphasic reactions.

Patients that should be considered at higher risk of systemic/anaphylactic reactions:

If your clinic sees 5-6 new patients per day and all of them undergo skin testing, you could expect one systemic reaction every 10 weeks, so be prepared.

The current allergy skin tests are virtually painless. This video by Dr. Bassett, a board-certified allergist from New York City, shows what to expect when visiting an allergy clinic for diagnosis and treatment:

From ACAAI online allergy lectures (COLA): This is a documentary about a workshop designed to teach and assess the ability of allergy/Immunology fellows to perform allergy skin tests. Held on April 20, 2012:

David Fischer, MD @IgECPD4: What is the relative safety of doing skin prick testing in patients on beta-blockers? Pretty good from this study http://www.aacijournal.com/content/6/1/2

@Allergy: Skin prick testing on BB safe in 199 patients http://bit.ly/HI5EyF - However, Incidence of systemic reactions is 1:250 with SPT

@Allergy: There are regional differences, e.g. number of skin tests per visit in the U.S., multisensitized vs. monsensitized patients.

David Fischer, MD @IgECPD4: Really depends on severity of pt population, venom/penicillin vs food/inhalant, no of tests picked and methods/doses picked 4 tests.
Posted by Author on 12/04/2012