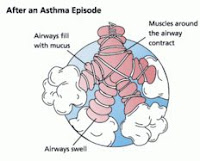 Levels of FeNO, reactance area (AX), resonant frequency (Fres) and blood eosinophils were increased in small airway dysfunction group. FeNO, AX and Fres correlated with FEF25-75% values. A receiver operating characteristic (ROC) analysis showed that the combination of FeNO, AX and Fres had a greater area under the ROC curve (AUC) than each of them individually.