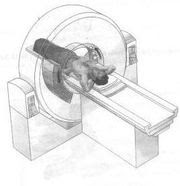 Computed tomography (CT) assessment of air trapping has been considered useful as a measure of small airway disease. Mean lung density (MLD) and the percentage of the lung field occupied by low attenuation area (LAA%) can be evaluated automatically, and their expiratory/inspiratory (E/I) ratios correlate with asthma severity and spirometry parameters. However, mosaic attenuation, another indicator of air trapping, has been assessed visually, and its functional relevance remains controversial.

This retrospective study of 36 nonsmoking patients with stable asthma attempted to correlate mosaic attenuation, which was assessed visually and automatically, and the E/I ratios of MLD and LAA% with clinical and physiological variables, including impulse oscillometry (IOS) indices.

Only the E/I ratios of MLD and LAA% correlated with forced expiratory volume in 1 s/forced vital capacity of spirometry and the IOS indices of resistance from 5 to 20 Hz.

The automatic method for analysis of mosaic attenuation could be useful, but the results themselves may not be reflecting small airway involvement of asthma, unlike the E/I ratios of MLD and LAA%.