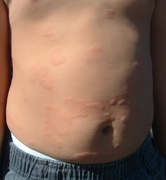 Schnitzler’s syndrome (SchS) is an autoinflammatory disease characterized by the association of:

The first case was described by the French dermatologist Professor Dr. Liliane Schnitzler in 1972.

As the phenotype is rather unspecific and many physicians are not familiar with this syndrome, SchS is highly under-diagnosed. This was underlined by the recent retrospective study at the Mayo Clinic, in which 46 undiagnosed cases were identified by cross-referencing cases from their dysproteinemia database with medical records from all patients with chronic urticaria at that institution.

The authors noted that since their previous review in 2007, the number of reported SchS cases has tripled due to increasing awareness of the disease and the remarkable efficacy of IL-1 inhibition.

During the past 40 years, SchS has evolved from an elusive little-known disorder to an autoinflammatory disorder that is recognized by increasing numbers of dermatologists, rheumatologists, allergologists, hematologists and other specialists.

Diagnostic criteria have been revisited, effective treatments have been identified (IL-1 (and IL-6) inhibition), as well as the risk of development of lymphoproliferative disorders, and novel genetic techniques have partially shed light on the pathophysiology of SchS.

Presumably, during the next decade, (mosaicism of) mutations of genes in the IL-1 pathway in several other cases of SchS will be uncovered. Finally, long-term follow-up will teach us if IL-1 inhibition is capable of preventing the development of lymphoproliferative disorders.

Email ThisBlogThis!Share to TwitterShare to FacebookShare to Pinterest
Labels: Urticaria