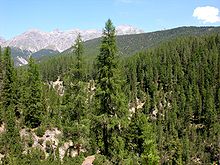 Western lifestyle is associated with high prevalence of allergy, asthma and other chronic inflammatory disorders. ‘Biodiversity hypothesis’ suggests that reduced contact of children with environmental biodiversity, including environmental microbiota in natural habitats, has adverse consequences on the assembly of human commensal microbiota and its contribution to immune tolerance.

This study analysed 4 cohorts from Finland and Estonia with 1,000 children and adolescents aged 0.5–20 yrs. The prevalence of atopic sensitization was assessed by measuring serum IgE specific to inhalant allergens. WProportion of 5 land-use types—forest, agricultural land, built areas, wetlands, and water bodies—in the landscape around the homes was calculated using the CORINE2006 classification.

The cover of forest and agricultural land within 2–5 km from the home was inversely associated with atopic sensitization. This relationship was observed for children 6 years of age and older.

Land-use pattern explained 20% of the variation in the relative abundance of Proteobacteria on the skin of healthy individuals, supporting the hypothesis of a strong environmental effect on the commensal microbiota.