In a retrospective, longitudinal study of 54 patients with CVID already treated with immunoglobulins, the researches examined changes of lung function and findings on high-resolution computed tomography (HRCT), obtained at 2 time points 2 to 7 years apart (T0 to T1). 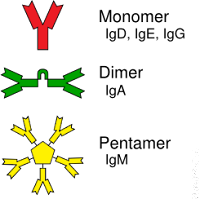 Despite a mean (SD) serum IgG level of 7.6 (2.3) g/L for all the patients during the entire study period, lung function decreased from T0 to T1. The combination of a low serum IgA level and serum MBL was associated with the presence of bronchiectasis and lower lung function and with worsening of several HRCT abnormalities. Increased serum levels of TNF-alpha were related to deterioration of gas diffusion.

A mean serum IgG level less than 5 g/L between T0 and T1 was associated with worsening of linear and/or irregular opacities seen on HRCT.

For a period of 4 years, lung function and HRCT deteriorated in CVID patients treated with immunoglobulins.

Email ThisBlogThis!Share to TwitterShare to FacebookShare to Pinterest
Labels: Immunodeficiency