Allergy to steroids is rare but should be investigated 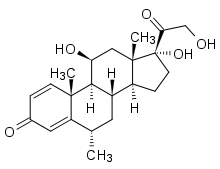 Allergic reactions to systemically administered corticosteroids (PO or IV) are infrequent, especially considering their extensive use. The aim of this Spanish study was to evaluate the IgE response in 4 patients with immediate allergic reactions to methylprednisolone (MP).

4 patients who developed immediate reactions after MP administration and 10 controls with good tolerance to MP administration were evaluated.
Skin prick and intradermal testing were done using MP, hydrocortisone (HC), and dexamethasone (DX). If negative, a drug provocation test (DPT) was done to confirm the diagnosis and assess cross-reactivity. The in vitro IgE response was evaluated by the basophil activation test (BAT) and ImmunoCAP.

The study confirms the existence of immediate allergic reactions to MP and that some are mediated by specific IgE antibodies.
Skin testing, ImmunoCAP and the BAT are useful to confirm the diagnosis.