Increased risk of pneumococcal disease in patients with atopic conditions 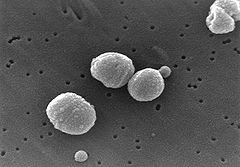 The same research group has previously reported an increased risk of serious pneumococcal disease (SPD) among patients with asthma.

The study subjects were residents of Rochester, Minn, who developed SPD between 1964 and 1983 and their matched matched controls.

All individuals with atopic conditions were identified by the physician diagnoses including atopic dermatitis or eczema, allergic rhinitis, and hay fever. A total of 3941 records were reviewed and 174 SPD cases identified.

Atopic conditions other than asthma were associated with an increased risk of SPD (odds ratio, 2.13).